Originally posted on another blog on Aug. 16, 2010.  Reposting it here on what would have been Elvis’s 76th birthday.

Today is the 33rd anniversary of Elvis Presley’s death. He was 42 then, so that means he would have been 75 today — the same age as the Dalai Lama and Woody Allen. That’s hard to imagine.

Still, I think it’s fair to say that Elvis changed the world.

Yeah, it’s easy to goof on Fat Elvis, with his sequinned jumpsuits and voracious appetite, but I’m not talking about Fat Elvis.

I’m talking about Skinny Elvis, the good-looking kid from Tupelo who walked into Sun Records in Memphis and basically invented rock’n’roll.

Of course, some people say Elvis didn’t invent anything, that he basically took rhythm and blues and made it safe for White America, but that isn’t quite right. 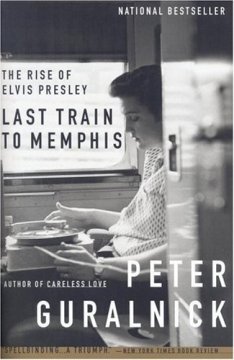 Somewhere in Peter Guralnick’s 2 volume biography of Elvis (if you haven’t, read it), he points out that Elvis was a sponge when it came to music. Elvis listened to everything — R&B, bluegrass, country, gospel — and processed it, synthesized it. He took all these musical strands and wove them into something else, something new.

Sure, odds are someone else would have done that if Elvis hadn’t, but Elvis did, so let’s give him credit.

He was sexy and dangerous, too, and that’s something teenagers hadn’t really seen before, at least not in one package. Girls wanted him, and boys wanted to be him. You wouldn’t have had The Beatles if you hadn’t have had Elvis.

John Lennon (I think) said Elvis died when he went into the Army, and I agree. Elvis’ music was never as raw as before he was drafted.

In the 1960s, he made a string of dumb movies and went Vegas, and in the ’70s, well, we all know about Elvis in the ’70s, but by then, he’d already changed the world by changing the music.

I think those early records — “That’s All Right,” “Mystery Train,” “Blue Moon of Kentucky” — earned him a lifetime pass and more than made up for later songs like “Rock-a-Hula, Baby” and “The Wonder of You.”

“Blue Moon of Kentucky,” after all, was a bluegrass tune — in waltz time, at that — until Elvis got hold of it and turned into a rocker in 4/4 time.

I’d argue that is something close to genius.

25 thoughts on “Elvis is still everywhere”