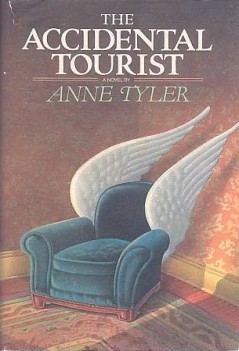 It’s been a few years since I read The Accidental Tourist, but it’s a book that’s stayed with me — not because of its theme of embracing life and moving outside your comfort zone but because of what it taught me about how to pack a suitcase.

Anne Tyler’s book is about a guy named Macon (William Hurt in the movie), who writes passport-sized travel books for “accidental tourists” — business travelers, mostly, who have to leave home and want to make the trip as painless as possible.

Of course, the point of the book isn’t to give travel advice. Being an accidental tourist is really just a metaphor for Macon, who divorces his wife (Kathleen Turner in the movie) after their son is killed, only to get involved with a free spirit (Geena Davis), who brings him back into the world.

I think that’s what it’s about, anyway. I don’t really remember much about the plot. What I remember, every time I take a business trip, is the travel advice:

You might disagree and think I’m a jerk because I don’t want to talk for a couple of hours to the random person wedged into the seat next to mine, and that’s fine, you might be right, but trust me on taking only one carry-on bag.

The joke about Atlanta is that every street is named Peachtree.

Of course, this isn’t true. Only 71 streets in metro Atlanta are named Peachtree, and many of them intersect with one another, and while locals know which Peachtree they’re talking about, it isn’t always obvious to out-of-towners.

I drove to Atlanta the other day on business. I printed out my hotel reservation. It said my hotel was on Peachtree Street Northeast, but when I plugged the address into my GPS (you don’t want to drive in a city where 71 streets are named Peachtree unless you have a GPS with updated maps), it came up dry.

The hotel’s website listed the Peachtree Street address, too, so I called the front desk. The bored-sounding woman who answered said to look up the same number but search for Peachtree Center Avenue Northeast. (I’m guessing I wasn’t the first person to call for clarification.)

What’s funny is the different Peachtrees weren’t named for an actual peach tree.

According to historians (OK, Wikipedia), Peachtree was named for a Creek settlement called Standing Pitch Tree. Supposedly, the Creek used the pitch, or sap, from pine trees in its ceremonies. “Pitch tree” didn’t sound right to European settlers, so they called it “peach tree.”

Which is interesting but isn’t going to help me get back to the interstate.

SkyMall is the catalog that’s in the back of airplane seats.

It’s what you read when you forget to bring a book or a magazine or the free USA Today from the hotel and you’ve already thumbed through the in-flight magazine, twice.

What’s interesting is that SkyMall has built a successful business (it’s been around since 1990) selling things no one especially wants (such as a 4-foot replica of the Eiffel Tower for $199.99) in a location where it’s pretty much impossible to buy things on impulse (8 miles above Mississippi).

It’s hard to imagine buying a 28-inch garden sculpture of Bigfoot ($115), for example, if you’ve had a few minutes to think it through.

On the other hand, you have products like these: